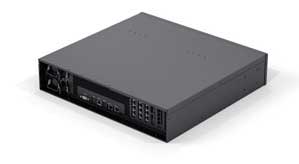 The new General Micro Systems (GMS) “Goliath” 1U and 2U short rack servers are compact and rugged—only 16-inches deep—and ideal for shipboard and sub-surface high-performance applications that are space-constrained. Using the latest Intel® Scalable Xeon® server and Nvidia® GPGPU AI co-processors, “Goliath” is a marvel of systems engineering, packing over 4U worth of server and AI functions in only 1U or 2U. This saves size, weight, power, and cost (SWaP-C) for NAS, recorder, data mining and sensor fusion applications, or naval afloat system upgrades.

Where most full-featured servers are 19-, 22-, or 24-inches deep, Goliath servers are a mere 16-inches deep. The rugged servers can be placed in tight locations such as submarines, close to curving walls or doorways, in narrow-body anti-submarine warfare (AWS) aircraft, or tucked tightly to bulkheads in companionways on smaller ships and surface vessels. Despite their small size, the dual-socket, twin Scalable Xeon servers use Intel’s latest server processors: Gold/Platinum up to 24 cores (embedded SKUs) or 28 cores (server SKUs) with each CPU addressing up to 1 TB of ECC DDR4 memory. They also accommodate one or two Nvidia V100 200+ TFLOPS GPGPU AI co-processors.

“We’ve seen the competition, and don’t know why they waste so much space and weight,” said Ben Sharfi, CEO and chief architect at GMS. “There is no other Scalable Xeon server with so much storage, memory, AI processing, add-in I/O or raw performance, in such a small package with the latest of every conceivable server technology. If size or weight is the concern, Goliath is the only choice—and it’s the best choice.”

Goliath is designed in America with the same design ethos as the company’s successful MIL-SPEC conduction-cooled TITAN 1U and 2U servers, or deployed conduction-cooled small form factor (SFF) chassis and systems. But in Goliath, TwoCool™ BMC-controlled fans mitigate heat reliably while keeping costs down. Optional features like zeroize via GMS SecureDNA™ or hardware secure erase via FIPS-140 or Opal 197 drives, allows for crypto data-at-rest on the removable SSD cartridges. A typical use case allows an encrypted 32 TB data cartridge to be moved physically between operator locations—such as between an airborne platform and a ground-based analyst station. Goliath-NAS holds five removable cartridges.

All Goliath variants have 2x 1GbE LAN ports, console video, eSATA for external drive arrays, optional hardware or software RAID, a BMC with dedicated Ethernet port and TPM, and optional 10/40 GbE (copper or fiber). A DVD/Blu-ray drive is optional, as are serial ports and audio I/O. Chassis use GMS’ “egg crate” RuggedDNA™ techniques for superior shock and vibration tolerance, and operating temperature is -20 °C to +55 °C. Single- or dual-redundant power supplies are standard, in 110VAC or 220VAC, plus select DC voltages.