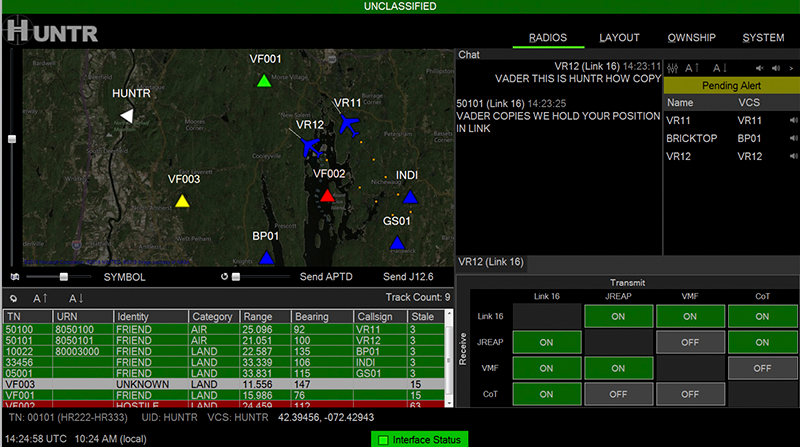 In addition, during the week prior to Timber Express 2020, Curtiss-Wright participated in the CESMO “Code Fest” exercise in support of the new protocols implemented in the newest version of CESMO, AEDP-13 vB.1 (NATO document).

“TCG-HUNTR is a breakthrough software application that improves and simplifies the task of moving data between similar and dissimilar tactical data links,” said Lynn Bamford, President, Defense and Power. “We are very pleased with the success of our participation in this year’s Timber Express exercise, and we thank the German Air Force for the opportunity to demonstrate TCG-HUNTR’s ability to provide warfighters and command and control centers with real-time access to accurate operational data in the field.”

“Timber Express 2020 was again a very successful event. Nowadays, being networked decides who wins or loses in a modern conflict,” said LtCol Volker Schaaf, German Air Force Headquarters, in his role as the Officer Scheduling the Exercise. “That’s why it is very important in this exercise to connect the different data link systems. In order to cope with this, we rely on user-friendly systems, HUNTR was a valuable contributor.”

During Timber Express 2020, Curtiss-Wright conducted bidirectional Link 16, CESMO, VMF, and JREAP-C operations, including the establishment of seamless text chat links and a common operational picture on all devices via TCG-HUNTR. For the first time, TCG-HUNTR translated and forwarded to all other networks the location and identity information of radar emitters detected by platforms on the CESMO network. TCG-HUNTR allowed ground forces using Android® and Windows®-based software to conduct multiple VMF digitally-aided close-air-support (DACAS) missions with Link 16 fighter aircraft. In a historic first, Link 16 fighter aircraft were used to command Airbus manned-unmanned-teaming (MUM-T) remote carrier drones to attack a designated target.

The cross-platform Timber Express 2020 exercise included a wide range of airborne and ground platforms and communications equipment. TCG-HUNTR was successfully used to tie together all participants into a common command and control and operating environment.