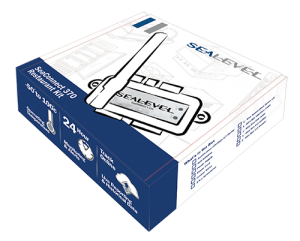 “In addition to providing records for compliance purposes, the restaurant kit is really giving restaurant owners and operators peace of mind,” says Sealevel applications engineer Will Rostron. Rather than walking into a unit full of ruined food the next morning, restaurant owners and staff are notified immediately when temperatures reach unsafe levels, mitigating food loss.

The SeaConnect 370 Restaurant Kit conducts simultaneous temperature monitoring of multiple machines or spaces using wired temperature sensors. Fully integrated with a web-based interface, thresholds are set and text and email alerts deploy when temperatures are exceeded. Actions can also be configured – such as turning on back-up power or setting off an alarm.

With the addition of Sealevel’s SeaCloud IoT platform, data is recorded and available to meet compliance standards. Rostron says, “Consistent documentation can be a challenge when it depends on human memory and reliability rather than an automated process.” Over time, restaurant staff can use the available data for preventive maintenance and identify ways to improve operations.

The SeaConnect 370 Restaurant Kit was developed specifically as a simple, bolt-on solution for smaller kitchens without incurring additional equipment costs. With a wall mount power supply, familiar RJ11 (telephone) cabling, and two temperature sensors in the standard kit, users will be able to install the device quickly and easily. However, each SeaConnect 370 can monitor up to 10 sensors so expansion for various operational needs is available.