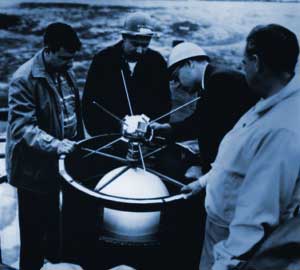 Sixty years ago the U.S Naval Research Laboratory (NRL) launched what has become the longest remaining man-made object in space.

Launched March 17, 1958, Vanguard I, a component of the Vanguard Project, is a small aluminum sphere (16.5 cm in diameter) that was designed to partake in the International Geophysical Year (IGY) — a series of coordinated observations of various geophysical phenomena during solar maximum, spanning July 1957 through December 1958.

The basic objectives of the Vanguard Project were to build a satellite launching vehicle, get one satellite in orbit, track and verify orbital path, and accomplish one scientific experiment all before the end of the IGY. Homer E. Newell Jr., then acting superintendent of NRL’s Atmosphere and Astrophysics Division wrote, “To be useful, an artificial satellite must be observed, to launch an unobservable object into an orbit would be simply stunt, hardly to be classed as a worthwhile scientific endeavor.”

Following the unexpected launches of two Earth-orbiting satellites, Sputnik I and II, by the Soviet Union, and following a series of NRL’s own suborbital tests with the prior launches of test vehicles (TV) zero, one and two, NRL, set out to launch the first Vanguard satellite (TV3) into orbit, December 6, 1957. The launch however suffered a launch system failure and crashed on the launch pad in a fiery explosion. 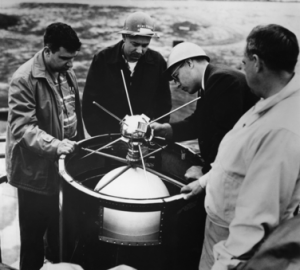 Despite this unfortunate setback, the Vanguard Project had still come a long way toward solving the problems of putting a satellite into orbit. This proved a valuable asset to U.S. engineers and researchers and was an enabling factor that contributed to the successful launch of the U.S. Army’s Explorer I, January 31, 1958, the first U.S. satellite placed in Earth orbit.

Three months later, on March 17, NRL successfully launched Vanguard I, becoming the second U.S. satellite in Earth orbit and attaining the highest apogee of any satellite, an altitude of nearly 2,500 miles.

“We are all still in awe of what the Vanguard team accomplished 60 years ago,” said John Schaub, director, Naval Center of Space Technology (NCST) at NRL. “In just 30 months, with the successful launch of Vanguard I, their work brought to culmination the efforts of America’s first official space satellite program.”
With the launch of Vanguard I, the NRL Vanguard Project had finally begun to see many of the mission goals come to fruition, to include testing of three-stage launch vehicles, establishing a network of terrestrial tracking stations known as ‘Minitrack,’ and measuring the effects of the space environment on an Earth-orbiting satellite.

Vanguard’s orbital data proved invaluable toward the understanding of upper atmospheric physics, geodesy, geodynamics, solar terrestrial relationships, dynamical astronomy, and exospheric structure. Additionally, Vanguard I returned a wealth of information on air density, temperature ranges and micrometeorite impacts as well as revealing that the earth is slightly pear-shaped rather than round. 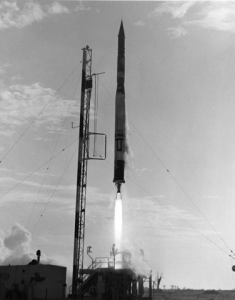 Instrumentation onboard Vanguard I included a set of mercury batteries, a 108-MHz transmitter, two temperature sensors, and a Minitrack beacon powered by six square solar cells – the first satellite on-orbit to be powered by photovoltaic cells. On-board transmitters were used primarily for engineering and tracking data, but were also used to determine the total electron content between the satellite and ground stations.

Although the satellite’s batteries lasted only 20 days, the crystal silicon photovoltaic, or solar cells, developed by the Army Corps of Engineers, continued to provide power for another seven years.

“As the first major U.S. space technology demonstration, the Vanguard Project instilled the rudiments of successful spacecraft engineering and space systems developments in the Navy, NASA and even the first Explorer payloads,” said Dr. Angelina Callahan, NRL Historian. “By the time Vanguard I transmitted its last signal in 1964, NRL had launched a prototype weather satellite, the world’s first intelligence satellite and performed an important series of transionospheric propagation experiments for submarine communications.”

With the signing of the National Aeronautics and Space Act, by president Dwight D. Eisenhower, the National Aeronautics and Space Administration (NASA) was formed. By way of presidential order 10783, NRL’s Vanguard Project civil service personnel were transferred into the newly created administration on October 1, 1958, and became the “nucleus” of the Goddard Space Flight Center.

Although data transmissions fell silent in 1964, ground-based tracking of Vanguard I has continued to provide scientists with data concerning the effects of the sun, moon and the atmosphere on satellite orbits.

“Vanguard I paved the way for NRL to leave our mark in the space technology field,” said Schaub. “We continue to draw inspiration from the innovation and uniqueness of the Vanguard Project, perpetuating our legacy of changing the way we see space down here on the surface.”

With a present apogee and perigee virtually unchanged from initial launch, Vanguard I, and subsequent satellites Vanguard II (Feb. 1959) and III (Sept. 1959), are all destined to continue to orbit the Earth and provide atmospheric and environmental data sets for well over another 60 years.